Tarot Cards - - the history of

I decide to research on tarot cards and the history behind on it. I learned there are several theories on it: Sufi masters, Grail-related representations, Indian holy texts, Gypsy imports, Hebrew lore, Greek philosophy, and the 13th century alchemists.

Let’s ignore all those theories. I like this paragraph:

“Speculation aside, we don't know, and perhaps will never know, what the original Tarot cards looked like. Nor do we know where they came from or who created them. We don't even know how many were contained in a deck. It has frustrated Tarot experts and inspired countless origin theories. However they came to be, the images of Tarot, like all true symbols, resound spontaneous self-expressions from the psyche's deepest springs; and for that reason they hold up magic mirrors to whatever reactions we bring them. Like all authentic artistic creations, Tarots are ultimately a mystery and will remain so.”

Even though there is countless debate on the origins of tarot cards, I ended up liking only one even though it’s a myth. If you’re familiar with the story Apollo and Daphne, then you’ll be surprised (I hope!) to hear that it had to do with the creation of tarot cards. The laurel tree, Daphne, turned out to be the source of the paper made for the original tarot cards. I love how this turns out to be this – how the tarot cards came of divination. 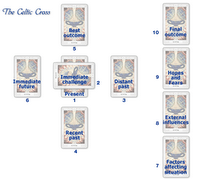 Trionfi is another word for Tarot cards, used mostly in the ancient times. The name "Trionfi" came from celebration for the appearance of a god.
There is no standard number of cards and the illustrations vary but their suits and meanings remain the same. But so far, the deck usually contains of 78 cards.
There are two sections: Major Arcana and Minor Arcana. The Major Arcana consists of 22 symbolical illustration on the cards. Those are numbered from 0 to 21. The Minor Arcana contains of four suits of 14 cards each. Chalices, Pentacle, Wands, and Sword suit.

I thought that the reader would be shuffling the cards for the consultant. However, this is not the case. “Before a reading is performed, the cards are shuffled by the person receiving the reading. Some say this transfers that person's energy to the deck.”
It makes sense, I realized.

Ah, I could go on and on. :D! I like learning new things, don’t you?
And, by the way, the reason of this research was I got a gift: Tarot Art Nouveau.
<3 thank you, sun.
For online course on Tarot Readings. Go here!